Driving down the Honshu coastline from Osaka, we passed through Onomichi and Takehara — both towns are worth seeing if you are ever in the area. Onomichi for the beauty that comes from a mash-up of hills, its seaside setting and horizon dotted end-to-end with the softly etched isles of the Seto Inland Sea; and the town has a spectacular hilltop Buddhist temple and park (Senkoji Temple, Senkoji Park). Check out Takehara for its historically rich and preserved district that shows off architecture and design elements from its 350-year history.

And then there is Miyajima Island, a destination that so completely lives up to its reputation (I usually go into these well-known, broadly hyped places with way too much skepticisim). But the various Shinto shrines and Buddhist temples on the island — with the stand-out Itsukushima — will humble even the most temple-weary traveler.

The island’s giant Torii, which stands about 50 feet high and according to most references weighs about 60 tons, is much more than a mere tourist attraction. We nabbed a triple on our visit…Torii Gate at low tide, at sunset, and under a full-ish moon.

Miyajima was an unexpected highlight of our travels in Japan.
The hike up Mt. Misen, the highest point on the island, was no slouch of a trail. The steep, many-stepped affair is a formula you become used to in Japan, but the payoff here is on the unique side — the view across the Inland Sea with a dozen or so velvety silhouettes of islands stretching off into the distance will leave you in awe. 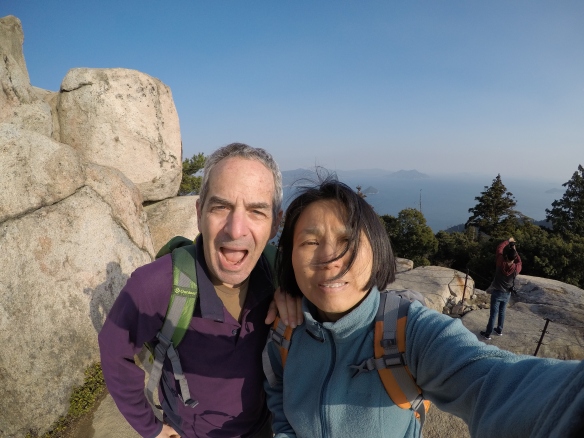